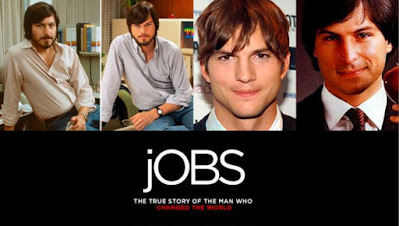 I recently watched the movie ‘Jobs’ which is a biopic made on the life of Steve Jobs, the co-founder of Apple Computer.

Ashton Kutcher was a good choice for playing the character of Steve Jobs, as he resembled him physically too well. Only, when he tried to ape the way Jobs walked, it looked a bit artificial.  Surprisingly, all other characters in the movie were also casted very well and closely resembled the real people they played. I wish the movie captured a bit of Steve’s childhood and other struggles. And some events in the movie were just touched upon, after all, there was too much to cover. Overall, it is a fantastic movie and  real tribute to the legendary Steve Jobs.

There are a few episodes in the life of Steve Jobs which can shock us.

First, very few people know that Steve Jobs was actually adopted. His biological father was an Arab Muslim man from Syria who met Steve’s mother when he was a teaching assistant in a college. His mother gave away Steve Jobs to a couple for adoption. Then she fought a case to take away the young Steve and give him to another couple for adoption. The woman who adopted Steve was scared of loving him because she thought he would be taken away from her. This fact that he was adopted and his real parents gave him away to another couple must have affected his psychology.

Secondly, at the time of parenthood, he suspected that his girlfriend had become pregnant because of some other friend and hence denied paternity. After he accused her, his girlfriend broke their relationship, moved out of their shared house and supported herself by cleaning houses. This shocking incident happened for real and in the movie, Jobs is shown as being very insensitive in this part. But Steve Jobs reunited with her and accepted his daughter when she was 9-year-old. As inheritance, he also gave away large part of his wealth to his daughter. You can read about his daughter here.

If we relate the above two incidents, we can clearly see that just like Steve Jobs biological parents “disowned” him, he also tried to disown his daughter, although under a different pretext. But finally humanity won and he reconciled with his daughter and gave her a normal childhood.

Another interesting stuff about Steve Jobs is that he traveled to India seeking spiritualism and spent 7 months here. The movie captures some scenes from India and it felt nice.

Steve Jobs was considered a perfectionist and hard task master and I liked many of his attributes even though those would appear insensitive to most.

The movie also has some powerful dialogues:

It is also interesting to know that while Steve Jobs talked about changing the world and impacting the lives of people, his company raised the price of its products to exorbitant levels after his death, making iPhones a niche product only to be owned by the rich. We can also see that no new innovative products are coming out of Apply Inc, after Steve Jobs passed away. It rather seems that the “investors” or “board” have overtaken Apple once again, the same folks who had thrown Jobs out of the company he had himself founded.

People like Steve Jobs and Bill Gates (whom I idolized during growing up days) are the inspirations we need to find meaning in life.

Hats off to Steve Jobs.